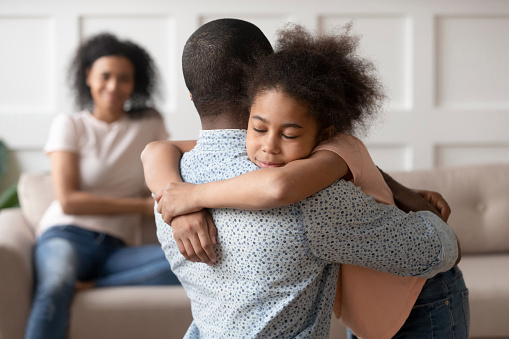 Simple Microsteps to let go of guilt, be a more positive parent, and really enjoy being with your kids.

Being a parent is arguably the most challenging and important job those with children will ever have. We do the best we can for our kids, but it’s human nature to feel guilty. There’s the daily guilt that many working parents will relate to: “I lost my temper and now they’re upset…” “I didn’t find enough time to play with them…” And then there’s the fact that as outlooks and philosophies on parenting change, we can feel guilty that we took the “wrong” approach.

Part of the problem is that many parents think they need to be perfect. Perfectionism is  particularly common among women, says cognitive psychologist Sarah McEwen, Ph.D., Director of Research and Programming at Providence Saint John’s Pacific Brain Health Center, and for moms can be exacerbated by what’s known in psychology as “intensive mothering.” The term refers to the expectation that, as McEwen tells Thrive, “mothers are still the main ones responsible for taking care of the kids and being fully devoted to the task, putting their children’s needs before their own. When they can’t meet the ridiculously high standards expected of them, they often feel guilty, studies show.

“Take yourself out of court,” says Lorraine Thomas, Chief Executive of The Parent Coaching Academy and author of a range of books on parenting, including Super Coach Arty Vs. The Shadow — Taking the Fear Out of Failure. “Guilt is such a strong, powerful, negative word,” she tells Thrive. “We use it most often about people who have broken the law.” There is no such thing as the perfect parent. The reality is that “you are doing the best job you can.”

Read on for five ways to banish guilt and accept yourself as a great parent.

Read full article on Thrive Global for ways to increase the joy quotient and decreasing stress.

How to Banish Parenting Guilt
Tagged on: Guilt    Parenting    Positive

Want to know more about what we do and how we can help? We'd love to talk with you.